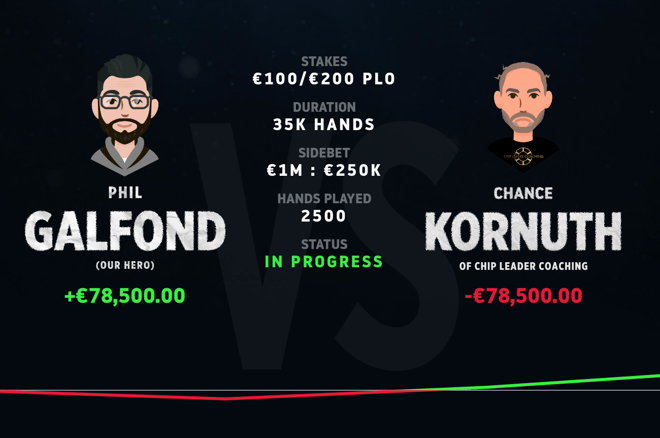 After a few months of quiet during the summer while several online poker tournament series took over the headlines, the Galfond Challenge is back, with Phil Galfond against Chance Kornuth underway on WSOP.com.

The rounds was good to the Chip Leader Coaching boss. Kornuth booked a $33,500 win on Day 1. However, Galfond struck back in slightly greater force on Day 2, taking Kornuth for about $45,000 to grab a small lead. He followed with another win on Day 3, while Kornuth won on Day 4 to make it a fairly even match in the early going.

Galfond collected the first big pot of the challenge about an hour in, when he was already ahead something like $10K. Kornuth three-bet and then came out with $1,800, half pot, on

completed the board. There was just under pot to play left, $16.5K.

for the second nuts. Kornuth had an airball with

Kornuth worked his way back though, and a seemingly boring hand developed where Kornuth raised, Galfond three-bet, and Galfond continued small for $1,200 on

checked through to a

river. Galfond checked and Kornuth bet $3,000. Galfond sprang to life with a pot-sized reraise to $15K, and Kornuth put the last $3K in. Galfond tanked until his bar was nearly exhausted before calling with fours full of nines, but Kornuth had the quads.

Galfond continued to bleed cash on that table as Kornuth built up to $100K, and they reset the stacks after Galfond got a double in a four-bet pot when the flop came

. Galfond had binked top two with

for a flush draw plus backdoors. He turned the

for additional outs but improved no further.

One of the biggest pots of the day developed awhile later when Kornuth got the four-bet in preflop and Galfond led out small for $2,400 on

. Galfond bet again with $7,800, half the pot. Kornuth peeled again and the river was the

. Galfond stuck in the last $12,484 and Kornuth tanked a long time before calling with

for just aces with the nut blocker. It was good, though, as Galfond didn’t have so much as a single diamond:

Galfond did close out strong, winning a $26K pot when he turned kings full and got a pot-sized river raise paid after a turn slowplay. Plus, he won a four-bet pot on the other table, potting the flop and forcing a fold. However, it wasn’t enough to overcome his earlier losses as he posted an estimated tally of -$33,500.

Check out Run it Once Poker and cash in on amazing rakeback!

No archived video exists for this match, but Galfond was in a hole after the first hour or so, as Kornuth built a lead of around $40,000.

Awhile after that, they played for stacks. Galfond opened on the button and called a three-bet, seeing a

flop. Kornuth continued small with $1,200 and Galfond peeled, bringing a

. This time, Kornuth potted for $6K and Galfond called again, setting up pot to play on the

for two nut blockers and kings, and Galfond took it with

That hero-call, worth about a $52K pot, got Galfond close to even.

Galfond continued to win medium-sized pots and before long, he had about $55K on both tables and Kornuth was back down to his starting $20K buy-ins. Galfond then opened up a decent lead when he nailed the nuts on the river with a nine-high straight and got a pot-sized bet of $7K paid.

After getting his teeth kicked in for awhile, Kornuth struck back on a board of

. Galfond sprung a check-raise to $12,000 and faced a shove worth just under $22K. Deciding he was committed, Galfond called with

for a combo draw. Only the hearts were live as Kornuth held

for a made straight with an identical higher draw. A

He kept the momentum going, getting thin value with a ten-high flush and a pair blocker, potting river for $7K and getting called light by an unknown hand. Then, Galfond potted for $12K on a flushing river on an ultra-coordinated board after the turn checked through. Kornuth shoved and got through and appeared to be roughly even with that win.

Galfond righted the ship by picking off a couple of sizable bluffs, both times when he flopped huge hands and Kornuth went for check-raises and barreled turns and rivers.

After five hours of play, they called it a session with Run It Once later tweeting that Galfond had won $45K.

Again, no video archive exists for this match.

It wasn’t quite for stacks, but the first big pot came up about 25 minutes in, though it didn’t get big until the river. A flopped six-high straight remained the nuts, and Galfond led out on the end from the big blind only to face a raise on the king-high board. He potted right back to about $13K and Kornuth tank-called with a set of kings and a five blocker, which was a winner against Galfond’s own single-blocker bluff.

However, Galfond won enough of the other pots to make it so he was up an estimated few thousand at the first break.

. Galfond had the nuts with

. Luckily for Galfond, the river was a

, enabling the get half of the $57K in the middle.

Kornuth attempted a large bluff catch when he three-bet preflop and bet $1,800 on

, enticing a call from Galfond. On the pairing

river, Galfond went into his time bank then piled for $13K. Kornuth tanked even longer then called with

, but the light call failed as Galfond had

for a flopped wrap that ran out a backdoor flush.

Galfond had given back much, maybe all, of his winnings when a big pot developed on

. Kornuth bet half the pot and called a pot-sized raise on the turn, about $16,000. On the river, Kornuth check-folded for his last 13K, and Galfond retook a small lead.

Galfond picked it up in the following couple of hours, winning several sizable but non-all-in pots that boosted his win to around $30,000 or $40,000. Showdowns were few and far between in big pots, as each time a player piled river the other decided against looking up the final bet.

Kornuth won a big pot when he opened on the button and Galfond three-bet, bringing a

flop. Galfond potted for $3,600 and Kornuth peeled, and Galfond liked the

enough to pot again. Kornuth shoved and Galfond called for a $40K pot.

Kornuth had a nice spot with top two and nut hearts against a pair of nines, and one live flush draw with a gutter. The

river didn’t do it for Galfond, and Kornuth moved into the green.

A beautiful spot developed for Kornuth when he opened on the button, Galfond three-bet, Kornuth four-bet, and Galfond got it in for $27K preflop. Galfond was in rough shape with

board bailed him out with a winning straight.

when stacks went in for a $40K pot once again. Galfond had flopped the nuts and turned better nuts with

for the second nuts and a set. The

failed to improve his hand.

They quit after a long session of more than five hours with Galfond estimated to be up a bit and full results pending.

flopped. Kornuth bet in position, Galfond check-raised to $2,400, Kornuth came back with $8,400, and Galfond piled. Kornuth quickly got in there with

for the nuts. Galfond had the top wrap with

but saw the board brick out to send the $40K pot to his opponent.

A notable hand went down about two hours in when Galfond put in the three-bet preflop and Kornuth peeled. They checked the flop to a board of

. Galfond checked again and Kornuth bet $1,800. Galfond called and the river was the

. Galfond checked and called $5,400, winning a shocking showdown with just

for sixes up as Kornuth showed

The players were almost 200 big blinds deep when they played a huge pot for a three-bet from Galfond. Galfond went with a small bet of $1,200 on the

flop. Kornuth continued and faced a pot-sized bet of $6,000 on the

turn. The river was a

and Galfond potted once more. This time, Kornuth tanked and then shoved. Galfond had to release, and at the same time, he bluffed off on the other table to lose a pot of $37K when Kornuth picked off his river pot with two pair and a straight blocker.

At that point, Kornuth was racing toward a six-figure win. Galfond managed to turn things around in the second half, though.

flop and Galfond called, bringing the

. Kornuth potted for $18,000, nearly everything Galfond had. Galfond was ready with

. He only had a few cards to fade as Kornuth showed

for top two on the flop.

With the session close to winding down, Galfond earned another stack. He raised and called a three-bet then called a continuation-bet of half the pot on

but was up against

for the nuts. The

The rally was enough to get Galfond close to unstuck on the day but he still ate a small loss of $20K.