In the first Galfond Challenge, Phil Galfond suffered huge losses early in the contest to ‘VeniVidi’, slumping to a €900,000 deficit that many thought would finish him off, not only in the challenge itself, but perhaps the overall schedule of events on Run It Once.

That, of course, didn’t happen as Galfond pulled back his losses and seized a late, great victory with a thrilling comeback victory for the ages. 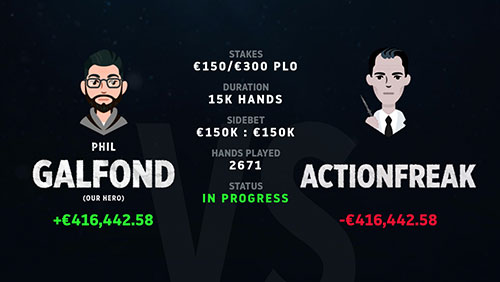 It must come as something of a surprise to the great man, then, that he’s got off to such a strong start against the similarly-talented ‘ActionFreak’. While Galfond has begun his ‘second’ challenge against Bill Perkins, the busy schedule of the Die With Zero author, businessman and philanthropist demands a sporadic series of sessions rather than a regular return to familiar tables. That doesn’t help the narrative of the challenge, of course, and Galfond has been wise to start the challenge against ActionFreak. Taking place in Pot Limit Omaha, just like in the VeniVidi challenge, Galfond has got off to the opposite kind of start this time round.

The terms of Galfond’s challenge against ActionFreak are slightly different to the ones which framed the VeniVidi clash. The action is €150/€300, so swings are even bigger, the average pot is larger and because of that, the $416,442.58 that Galfond leads by is a very healthy lead but not one that ActionFreak will feel he can’t come back from.

Galfond fought back later in the session, however, as he got revenge against ActionFreak’s aces by scooping €65,000 from his opponent with a flopped flush. Another €68,000 pot went the way of Galfond when he rivered a full house against ActionFreak’s club flush. With a lead, Galfond got even more dangerous, and another hand where Galfond had turned trip jacks and rivered a full house gave him a profit on the day of $113,377, which led to ActionFreak calling time on the action.

Galfond, never one to rest on his laurels or, it would seem, to rest at all in any way, will be right back at it against a very familiar opponent this coming Wednesday. In a one-off ‘mini-challenge’ that is sure to whet the appetites of fans looking forward to the main challenge between Galfond and ‘Jungleman’ a.k.a. Daniel Cates. This time, rather than there simply being money on the line, the loser will have to post a video detailing how the other man is the better player, according to Galfond’s initial briefing online.

We decided not to make you wait for our full challenge, which is still a ways away. @junglemandan & I will play a mini #GalfondChallenge next Wednesday!

The loser will post a video explaining why the winner is a better poker player & a better man. ? pic.twitter.com/gE7Ri0mPDN

You can watch the latest session in the Galfond Challenge where he won for the second day in a row against ActionFreak right here: