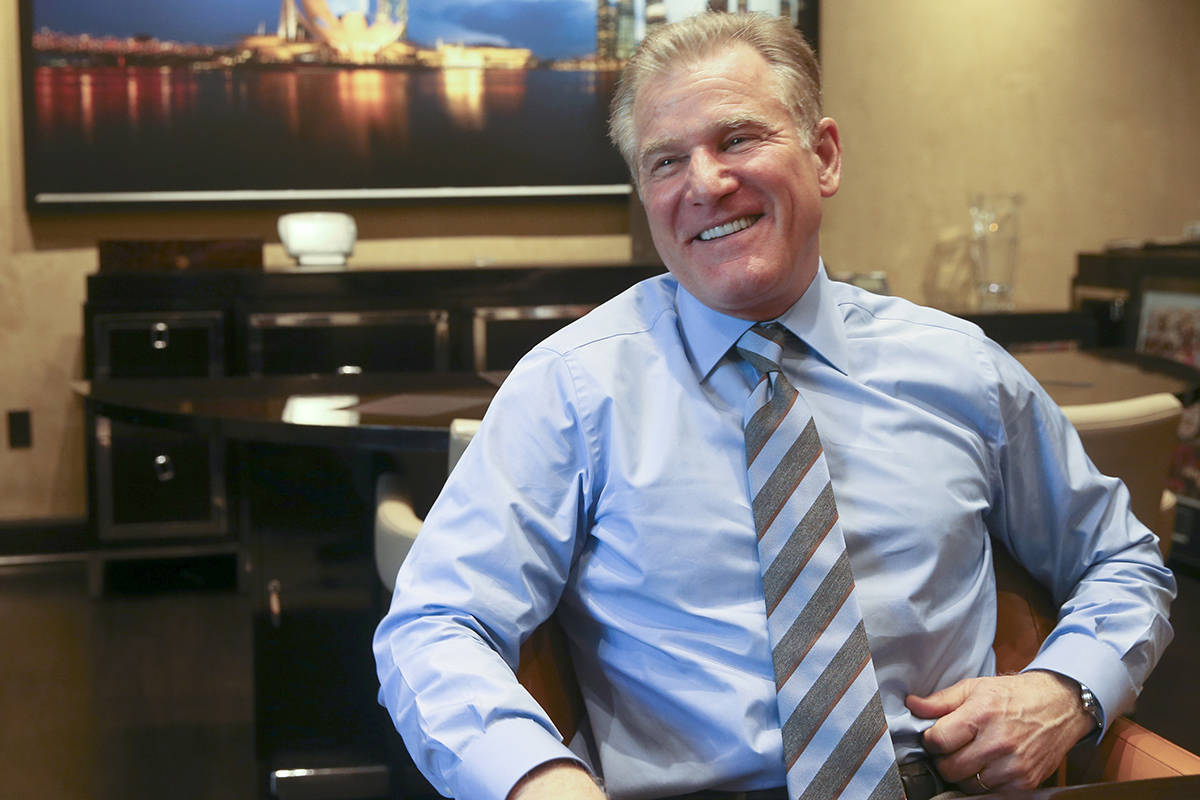 Adelson died Jan. 11 after a battle with non-Hodgkin lymphoma.

Goldstein said he was notified by the company’s board of directors of his appointment.

The executive changes were announced after the close of the stock market and detailed in a Securities and Exchange Commission filing. The announcement came a day ahead of the company releasing its fourth-quarter earnings report Wednesday.

Dumont joined Sands in 2010 and has been a director of the company since April 2017. In addition to his role as executive vice president and chief financial officer, Dumont also held positions as senior vice president, finance and strategy, and vice president, corporate strategy. Before his roles at Sands, Dumont worked in corporate finance.

“Mr. Adelson’s leadership guided us to the top of our industry, and his legacy lives on through the company’s 50,000 team members and the iconic properties he developed around the world,” Goldstein said in a statement. “Our spirits have been dimmer in these few weeks since his passing, but the future of the company he founded shines bright. He would expect nothing less than an aggressive pursuit of the work he started, and I am determined to lead this company forward in a way that best honors his vision.”

“Mr. Adelson established the roadmap for the future of this company, and that roadmap is unchanged,” Dumont, who is Adelson’s son-in-law, said in a statement. “I am dedicated to working with Rob and our leadership team to make our strategic objectives a reality. Our path forward is clear and remains true to the principles our founder was committed to for so many years – we will continue supporting our people and the local communities in which we operate, reinvesting in our current markets, producing strong returns for our shareholders and aggressively pursuing new development opportunities.”

“Mr. Goldstein is the perfect choice to take the reins at LVS as it enters into a new chapter,” said Brendan Bussmann, director of government affairs for Las Vegas-based Global Market Advisors. “He has been there from almost the beginning of The Venetian transition into the company that it is today. With Mr. Dumont having worked with him the last 10-plus years, they will be a strong team moving forward.”

Bussmann said that following Adelson was never going to be an easy task considering his visionary role with the company.

“However, Mr. Goldstein has the experience having been with the company for over 25 years to build upon its previous success and discipline as an operator,” he said. “He will be a steady hand as the company and the industry push forward out of the Great Shutdown.”

Nehme Abouzeid, president and founder of LaunchVegas LLC and a Sands executive from 2004 to 2013, said the Goldstein appointment makes sense.

“Rob has been with Mr. Adelson from day one. He knows the industry and Sands’ unique business model inside and out. He is also a well-liked and battle-tested leader,” he said.

“Las Vegas Sands is a mature company now, with a $44 billion market cap, global purchasing and sustainability programs, and strong regional leadership in its U.S. and Asia hubs. It is a complicated and heavily regulated business and it would be extremely difficult to drop in a CEO from another industry and have them hit the ground running. Why would you with the right person for the job already sitting in the chair?”

“I expect more evolution than revolution as the company is already a global leader in integrated resorts,” he said. “We’ll have to see how much COVID-19 puts a damper on any global expansion plans. They are very strategic, preferring to gain first-mover advantage in a new market rather than fight it out for market share in a saturated one. Certainly, Macao and Singapore still have room to grow as gaming and leisure destinations. They could harvest cash for years to come in those markets.

Abouzeid noted that company has always been “more of a real estate developer than a pure hotelier.”

But, he said, “even if they are late to the game in areas like online sports betting, Sands’ business assets and strong balance sheet allow them to make up a lot of ground with one stroke of a pen in a partnership deal.”

Abouzeid said Goldstein has weathered challenges before and while the pandemic is a big one, he should be up to the task.

“Rob has seen and weathered turbulence before, whether it was the 2008-09 financial crisis, the increased financial scrutiny the gaming industry is now under, or the ambitious development spree the company led in the early 2000s,” Abouzeid said. “Sands has always had a lot going on and the leadership has been able to compartmentalize and find a way to deliver success for employees, shareholders and the community.”

But COVID-19 is a big obstacle.

“COVID is the big wild card, though, as the world has never seen such a prolonged and comprehensive blow to travel and tourism. Sands has a lot of rooms and spaces to fill in Vegas and Macao,” he said.”The return of group business and increased airlift to Las Vegas will be important for both the company and the city’s recovery prospects. As Sands goes, so does Las Vegas.”

“That’s where we thought the company was going to go, as far as promotions into permanent positions with the untimely passing of Sheldon,” Swissman said.

“For the Adelson family, which is still a significant shareholder, this gives them a sense of security that the company will continue to be managed in the way Sheldon managed it himself for so many years,” he said. As for Patrick Dumont, “you’ve got someone who’s directly related to the family in about as senior of a position you can get within the company.”

Swissman acknowledged that Goldstein is filling big shoes at a challenging time.

“You couldn’t get more challenging than what they’re trying to do now. They’re trying to emerge from the pandemic, they’re a convention-heavy business, at least in Vegas, and everything points to conventions being the slowest piece to recover, so that’s an additional weight that sits on their shoulders.”

He also referenced recent news that Sands is exploring selling all the Las Vegas assets, “so it’s an interesting time to be at the head of the company.”

“Then, there’s the emergence of sports betting and online sports betting, which is historically something they’ve been opposed to, but thinking now that it might be an area they lean into more.

“All those things swirled together in a pot makes for an interesting time to take the helm of this massive gaming organization. I have every bit of faith in Goldstein. He’s been instrumental in the company for many years now, so he’s definitely the guy for the job, and he’ll be able to see them through,” he said.

Goldstein issued a letter to employees after the announcement, promising to uphold Adelson’s vision for the company.

“For more than 25 years, Mr. Adelson was both my mentor and dear friend,” Goldstein said at the end of the letter. “Since his passing, I have reflected on how best to honor him, and the answer became crystal clear. We will move forward with determination and resolve to continue growing this company’s position as the industry leader he made us. Mr. Adelson would expect nothing less.”