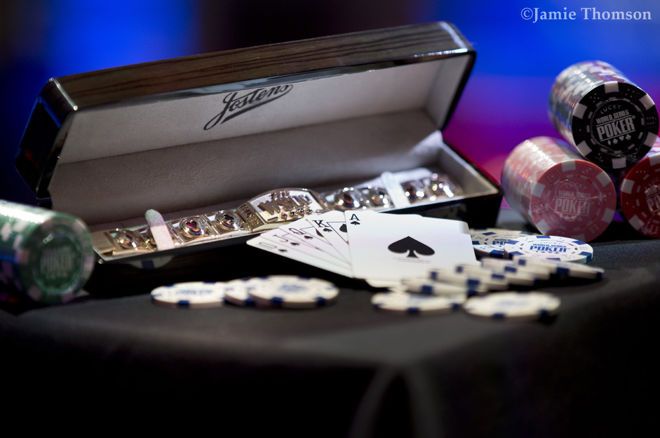 According to The Hendon Mob, Dunlap has $106,317 in live tournament earnings including a career-best $26,104 for finishing third in the Pendleton 2011 Fall Poker Round-Up $500 Main Event.

In addition to having success in the Pacific Northwest, which includes several victories in smaller events, Dunlap has also amassed six figures playing online. Now, he’s the proud owner of a WSOP online bracelet.

Everyone experiences tilt in this game we all love… even “KidPoker”!

Action of the Day

Todd “chi.t.420” Sladek began the final table as the chip leader while two-time WSOP bracelet winner Anthony “heheh” Zinno was the short stack. Not surprisingly, Zinno was the first to go after he got it in on the flop with a set of aces against three-time bracelet winner Matt “jacksup” Matros, who had a flush draw. The diamond flush came in on the turn and Zinno failed to pair the board on the river to fall in eighth place.

Matros wound up following him out the door after getting it in preflop with kings against Sladek’s aces, and then Sladek eliminated six-time circuit ring winner Blake “shampainpopn” Whittington cracking kings when he made two pair on the river.

Next to go was “thxsimgod” after getting it in with a flush draw and missing against Shane “danish01” Daniels, who finished the hand with two pair. Daniels then busted Jacob “Bandit275” Powers after the duo got it in on the flop with the former holding an open-ended straight draw and the latter a set. The straight came in and that was all she wrote for Powers.

On this same day in history, John Cynn and Joe Hachem won the Main Event

Sladek bowed out in third place after getting short, and that saw Dunlap take an 8.4 million chip lead into heads-up play against Daniels, who had 4.8 million. For the second time in the 2020 WSOP online series, Daniels was heads-up for a bracelet, though in his first outing he had to settle for second place in Event #6: $600 PLO8 Six-Max for $55,283.

Once again, Daniels was denied WSOP gold as he was unable to spin up his stack, ultimately calling it off when Dunlap had aces in the hole. Both players wound up making a club flush on the runout, but Dunlap’s was best to eliminate Daniels in second for $82,069.

The first step in getting set up to play on WSOP.com is to download the client. You can do so for both mobile (Android and iOS) and desktop (Windows 7 or higher and Mac OS X 10.6.8).

To get the correct version of the client, use the links below:

The next tournament on the schedule – Event #16: $500 No-Limit Hold’em Turbo – will take place at 3 p.m. PDT on Thursday. The PokerNews Live Reporting Team will once again be reporting all the action, so be sure to tune in then to see who captures the next 2020 WSOP bracelet!