Caribbean Stud Poker is one of the best-known poker variations played against the house. The origins of the game aren’t clear, although the well-known poker books author David Sklansky claims he is the one who created it back in the early 1980s.

Rules of the Caribbean Stud are simple as you’ll find out in this post, and they’re easy to learn. In terms of skill and strategy, this poker game isn’t demanding, and you’ll be able to play it close to the best with a few tips.

With that said, be warned that the house edge remains over 5% even if you play with the best possible strategy. 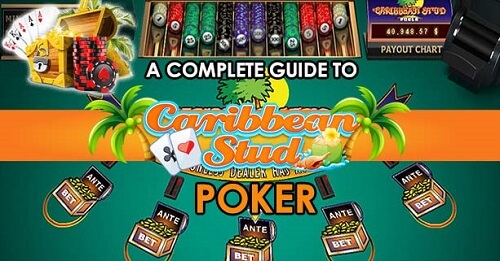 If you’ve ever played any high poker game variation such as Omaha, Hold’em, Stud, or even Five Card Draw, you should be good to go. Hands rank from a high card to a royal flush.

Like other table games, this casino game is also played against the house. There can be more players at the table playing simultaneously, though their only goal is to beat the dealer.

So, gamblers can actually cheer each other on when someone is making a big hand helps them and doesn’t hurt you at all.

At the start of a hand, you need to place the ante in the designated box. After that, the game dealer will deal all bettors five cards each, face down.

They will also take five cards each, but one of their cards will be turned face up for everyone to see. After that, you’ll have the chance to look at your cards and make your decision.

Once the cards are on their backs, the game dealer will compare their hand with the hand of every player at the table.

These bets will get paid if two conditions are met: