One day after releasing its first sports betting revenue reports, the Illinois Gaming Board struck a note of optimism on the early returns and potential growth for the new industry in the Prairie State during its Thursday meeting.

IGB Administrator Marcus Fruchter delivered the remarks, citing the $61.8 million in combined handle at Illinois sportsbooks from the months of March, June, and July. Sports wagering was not available in April and May because the state’s 10 casinos were closed due to COVID-19 and mobile sports betting had yet to launch. The handle was generated solely by Argosy Casino Alton and Rivers Casino, with the latter providing the entire online handle after launching BetRivers Sportsbook on June 18.

Sports wagering revenue figures for August, which will be delivered to the IGB by casinos at the end of this month in accordance with the rules of the gaming expansion bill Illinois Gov. JB Pritzker signed into law in June 2019, should prove more robust given there were six retail sportsbooks and three mobile sportsbooks in operation. Illinois has since added a seventh retail sportsbook in September with FanDuel launching at Par-A-Dice Casino in East Peoria, and it gained two more mobile operators as both PointsBet and William Hill started accepting wagers in the past week.

Illinois Gaming Board Administrator reports the state already has 230,000 mobile sports betting account holders! Wow. What will a mature market number be?

During his remarks, Fruchter noted that “as of the afternoon on September 15, the total number of online sports wagering account registration in Illinois surpassed 230,000,” a figure largely made possible by the two issuances of Executive Order 2020-41 by Pritzker. The most recent issuance, which occurred Aug. 19 when the governor restored 2020-41 through Executive Order 2020-52, is set to expire Saturday, and there has been no public comment from Pritzker or the governor’s office on if it will be renewed.

He initially issued Executive Order 2020-41 on June 4 and renewed it later that month, but let it lapse in late July. An email push started by DraftKings for users to lobby Pritzker and state government representatives to restore the executive order played a part in the governor doing just that last month. With three mobile sportsbooks — FanDuel on Aug. 28, PointsBet last Saturday, and William Hill on Tuesday — commencing operations since Executive Order 2020-41 was restored, there may be enough momentum for a 30-day renewal similar to the one in late June.

The $47.7 million mobile handle reported in July represented almost 93% of the overall handle, which was just shy of $51.4 million. Fruchter said the “nascent Illinois sports wagering industry is beginning to take shape into a robust and competitive market,” citing the seven casinos granted sports wagering licenses in addition to Hawthorne Race Course, with four of those casinos offering both retail and online sports betting.

A reminder to play nice and be professional

Fruchter noted the gaming expansion in multiple dimensions across Illinois offered him the opportunity to “remind new applicants, new licensees, and existing licensees about the Board’s expectations regarding professionalism.” The administrator pointed out the IGB’s job is to “maintain public trust and confidence and the credibility and integrity of Illinois gaming and our regulatory progress,” which includes licensees “conducting themselves in a professional manner when communicating with other licensees, the public, and the board.” 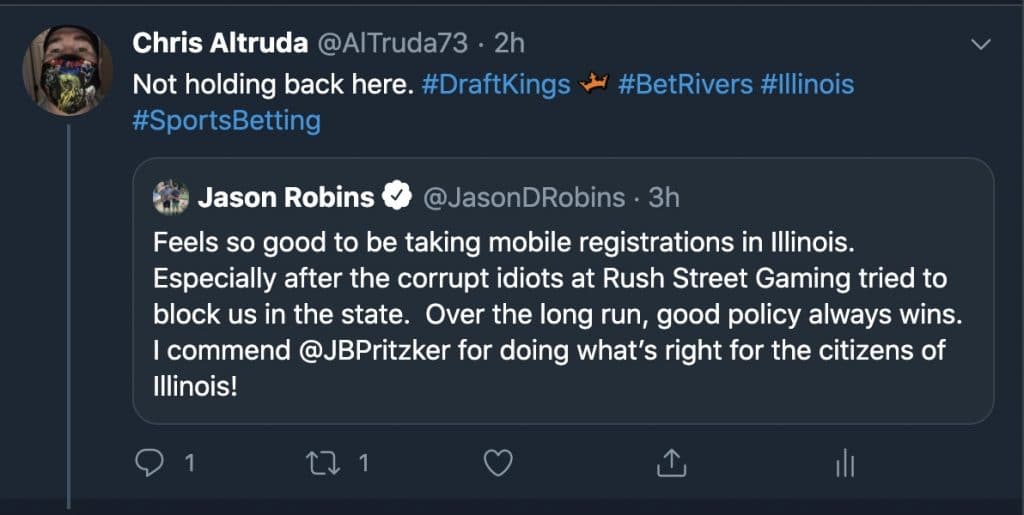 Though Fruchter did not identify any specific parties, it is almost certain he was referring to the back and forth between DraftKings CEO and co-founder Jason Robins and Rivers Casino owner Rush Street Interactive shortly after Pritzker’s restoration of Executive Order 2020-41 last month.

In a tweet deleted shortly after he posted it Aug. 24, Robins called Rush Street Interactive “corrupt idiots,” to which RSI pithily responded, “Rush Street has never been asked to leave a state, pays taxes on every wager, and has not been named in multiple consumer class action suits” in a statement to Sports Handle.

Fruchter continued to state that “other rules require licensees to conduct gaming operations that does not discredit the Illinois gaming industry or the state of Illinois. Thus, the board expect that all applicants, licensees, and key persons will comport themselves with professionalism. That includes public statements about competitors, in advertising, and in competing for patrons.”