Some of the most popular gambling games involve rolling dice. Although all gambling games are inherently games of luck, there is some skill involved. In dice games like craps and sic bo, is there a trick to rolling the dice?

You may think that there is not; however, as with many games,- there’s a good technique which can be perfected over time.

If you are interested in finding out how to make a dice roll the result you want, stick around as we explore how. 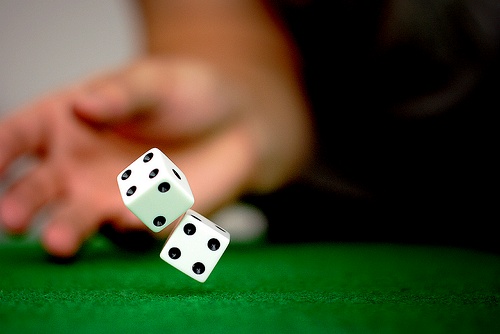 How to Roll Dice Better?

Contrary to what many may believe, there is an art to rolling the dice. People often dismiss games such as craps (which started off as a street game), as raw and lacking finesse.

However, that is not the case. You will find that many street craps players have found a way to cheat a dice roll. Some shooters are known to roll a 7 or 11 every time consistently over multiple rolls.

There are two ways to roll favorable results more often – one way is by cheating and the other is through practicing technique.

There is a simple dice throwing technique, which can improve your odds of getting the best results. Let’s say you want to place a pass line bet. When rolling, you want to see a result of more than 2 and 3 and less than 12.

Placing your thumb and index finger on the one and six means that those two numbers are least likely to come out in a roll. You have effectively upped the odds in your favor by ensuring that a 6 does not roll because then there won’t be a 12 result.

Moreover, reducing the likelihood of a one improves the odds for results greater than two and three.

This technique can be applied inversely too. If you would like the 6 and 1 to appear, then place your thumb and index finger on opposite sides of the dice. This technique needs to be practiced often to be perfected.

How to Cheat A Dice Roll?

There are two ways to cheat dice, you can simply use loaded dice, which can be skewed to factor a particular result. Simply keep betting on the result you know the dice will roll and you have a winning formula.

However, you can be easily detected by keen eyes and you may want to alternate between fair and loaded dice.

Another way to cheat your way to better a dice roll is to take advantage of the fast pace nature of dice games. As soon as you roll, quickly pick up the dice and call the result that you want in the hopes that no one has noticed what number was really rolled.

Is There A Trick to Rolling Dice Online?

When it comes to playing dice games online, there is no way to trick or cheat the dice roll. So, if you prefer to play a real game of chance where nobody is tricking or cheating their way to a win, try out at any of the fair online gambling sites we recommend.