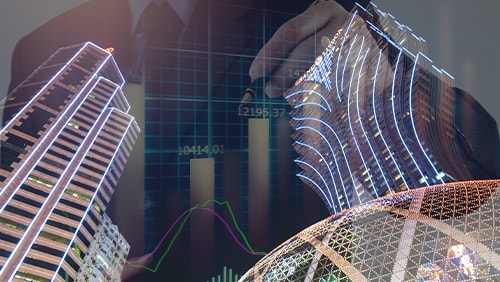 How will today’s potentially explosive elections in the United States affect Macau stocks? As nail-biting as they are and riot-instigating as they may be, it’s only a secondary question. The main problem for Macau right now is that the Chinese government is not letting anyone in to gamble. Until they do, it doesn’t matter who the U.S. president is. However, assuming everything does return to normal somehow at some point, then yes, the U.S. election results might matter in the longer term.

The basic answer is that a Biden administration would probably be less bad, as a second term Trump would unleash Sinophobic fury above and beyond what he’s already done in his first term with his protectionist trade wars and other belligerent nonsense. Joe Biden on the other hand could possibly rescind some of the tariffs that Trump has enacted. That would be quite welcome. Maybe he won’t but at least it’s a possibility. With Trump it’s completely out of the question, and so I believe a Biden victory would give Macau stocks a short term bump. Biden might even do something extra and send Ambassador Hunter over there to make a few fun deals and be a board member at Galaxy or whatever. Hunter would love that.

A Trump victory would scare away a lot of the Macau buyers that have come in to push the sector back up since March. Who knows what an unfettered second-term Trump could launch against China, especially if he blames Beijing for crashing the dollar when it sells U.S. Treasuries after Trump spends another $2 trillion on bailouts financed entirely by the printing press. I would even say that some sort of low-boil covert hot war between Washington and Beijing is not completely out of the question.

Fundamentally though, reality and Macau stocks are not exactly on the same page these days, whoever wins. The VanEck Gaming Vectors ETF, which tracks largely Macau casinos, has doubled since the March bottom. Why? There has been no recovery. Not even close. Visitation to Macau is down 78% in September compared to the same month last year. There is no rocket science here as to why. Visitation to Macau from anywhere other than mainland China, a trickle from Hong Kong and a drip from Taiwan is for all intents and purposes choked off entirely. It’s not the virus. There have been no new deaths from the virus in Mainland China since April. 105 have died in Hong Kong, zero since September 25.

It’s government policy that’s the problem, pure and simple. Same with the self-inflicted 2014-2016 Macau bear market triggered by a sudden and unexpected all out war against VIPs. The social distancing regime and quarantine restrictions on visitors from selected Chinese locales all make baccarat in Macau only just slightly more fun than a funeral these days.

You could say that the reason Macau stocks have rebounded so strongly since March despite fundamentals going pretty much nowhere is that everyone knows it’s all just the artificial restrictions that are killing the region, and not the virus itself. All it takes is one top down decision to call off all this paranoia off and traders have bought Macau anticipating that this will eventually happen. Meanwhile, there’s a bunch of money printing to keep capital prices afloat so the downside risk is considered small despite the fundamentals being catastrophic.

Eventually, the restrictions will wither way. The question is when. The problem is that Bejing is going to look bad either way. If they open back up and nothing happens, then maybe it was all a hysterical mistake. If they open up and cases rocket back up, they look even worse, so they’re stuck taking these tiny baby steps that are nowhere near fast enough.

It’s also unclear how much more of this strangulation the major Macau casinos can take before they fold. Las Vegas Sands for one is trying to stay above water, looking to sell its Las Vegas strip properties for $6 billion. I’m not sure who would want to take them up on that offer as Las Vegas feeder cities San Francisco and Los Angeles are turning into boarded up post apocalyptic wastelands as residents are moving to anywhere there aren’t rolling blackouts, lockdowns, wildfires, or the threat of post election day riots.

LVS’s cash position has been nearly cut in half since last year, debt is up another $1.5 billion, and operating expenses last quarter despite being slashed, came in at twice paltry revenues. We’ll find out what Melco’s and Wynn’s positions are this week, but we can pretty much assume that these casinos are also being bled dry. If travel restrictions and social distancing are not rescinded in Macau soon, then in a year or two these once grand casinos may go completely bankrupt.

The visitation statistics are actually quite comical, in a sad way. Hotel occupancy rates have not recovered at all since the lockdown regime began. September occupancy was still below that for March. 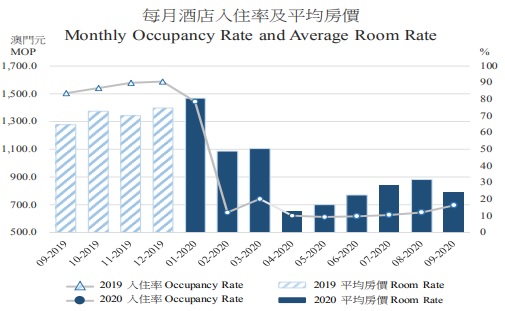 As for actual visitors, here they are for September in all their weird, sad glory. All 6 countries that that sent any visitors at all. 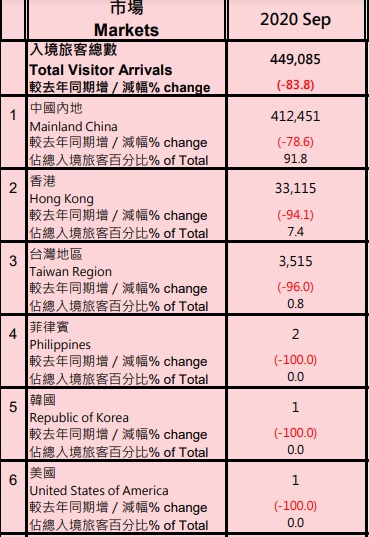 I wonder who the two guys from the Philippines were. Anyone who works at CalvinAyre maybe? Bill, was that you? Oh, and one person from Korea. And one from the United States. I hope he had fun. Maybe Rebecca Liggero can find him and do an interview. How did he get through customs? We all want to know.