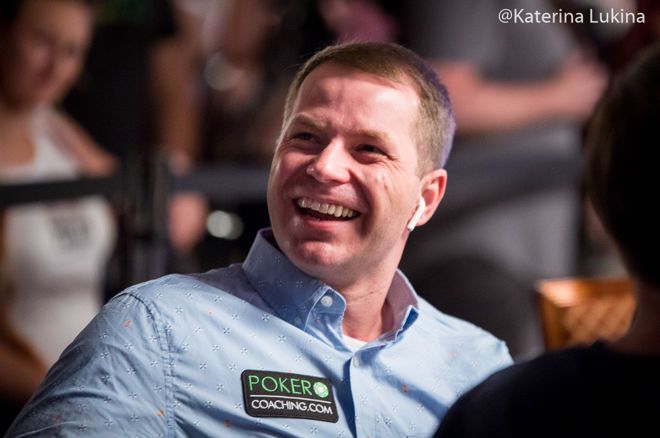 Sometimes, even when you have a good draw, you have to make a tight fold. I know from experience, including one spot in the 2019 World Series of Poker Main Event where I folded a draw in a tough spot.

in the big blind. The player in the lojack raised to 8,000 and the player on the button called. Right off the bat, we had to face a decision after a raise and call – should we go all in or call?

I actually think jamming all in is the best play if I think I have any sort of fold equity. That said, both these players were tight-aggressive, so chances are they have stronger hands and would be more inclined to call a shove. As such, I am more inclined to just call the raise and see a flop.

Had they folded, I would’ve check-raised all in, but the problem became if either player had a king, they’d never fold to my raise.

That’s what I did and the flop fell

, giving me a flush draw. I am not going to have a leading range in this spot ever, so I checked and the original raiser continued for 9,000. The button called and I didn’t like to see that. Had they folded, I would’ve check-raised all in, but the problem became if either player had a king, they’d never fold to my raise. Facing a bet and a call, it seemed likely I was up against a king.

The button player here should only continue with either a good draw, such as a flush draw better than mine or made hands like a pair of sevens or better. Given he’s a TAG player, he shouldn’t have a lot of sevens in his range, while a king is much more likely.

Facing the bet and call, I think we should call instead of jamming, which is what I do. The turn was the

and two checks saw the player on the button bet 25,000. Would the button randomly be betting here with a weak hand? I think the answer is definitely not.

With 71,000 in my stack, I don’t really have a lot of fold equity if I go all in as he’d only have to call 46K more. As such, I needed to either call or fold. It was basically a breakeven proposition for me to call – I have an 18% chance of making my flush and need to win 19-20% of the time to make it worthwhile – but what about implied odds?

If I make the flush and jam, my opponent could very well fold. Or, if they did call, they could easily have a hand like

for a better flush. It played out in a manner that those hands are very possible. It’s also possible the lojack could be trapping with a set. I doubt it, but it’s possible.

It all added up to this was a hand that I think I had to have the immense discipline to fold, which I did. The lojack folded too and we never got to see what the button had, unfortunately.

For a more thorough breakdown of this hand, check out my thoughts in the following video:

Jonathan Little is a professional poker player and author with over $7,000,000 in live tournament earnings. He writes a weekly educational blog and hosts a podcast at JonathanLittlePoker.com. Sign up to learn poker from Jonathan for free at PokerCoaching.com. You can follow him on Twitter @JonathanLittle.