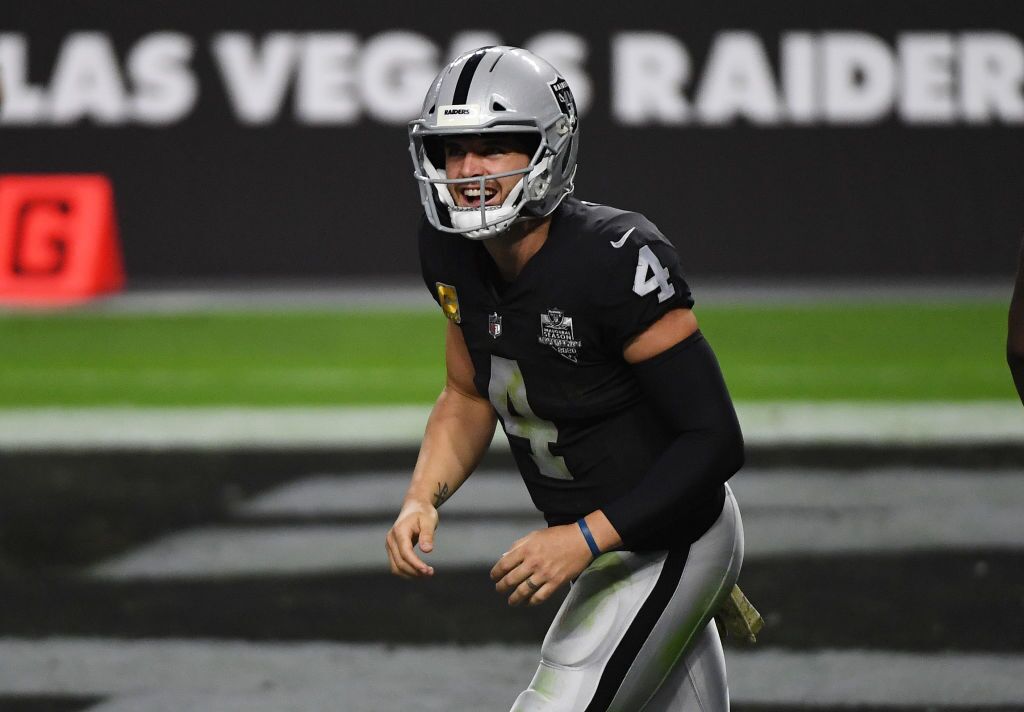 Featured in this article:

In case you didn’t know, Andy Reid’s teams are 18-3 after their BYE week. Kansas City was off Week 10 and look to avenge an earlier season loss to the Raiders this Sunday night. Despite that reality check, the Chiefs are 15-3 against the spread over their past 18 games.

Derek Carr, Josh Jacobs and the Raiders are humming. Winners of three straight, Las Vegas has scored more than 30 points in back-to-back games and three of their last five. The Raiders 37-12 win over the Broncos improved their record to 6-3 straight up and against the spread this season.

The Chiefs opened and remain 7-point road favorites at Las Vegas. The Raiders moneyline opened at +257. The point total opened at 56, but ticked up to 56.5 at most outlets. The total has gone OVER in seven of the Raiders nine games this season.

Kansas City has won four of the past five road games against the Raiders, while the new-look Las Vegas football squad has covered the spread in four out of their past five.

When last we saw the Chiefs, Teddy Bridgewater and Carolina were giving them a game. It took a 20-point second half and 33 points to escape with a two-point home win over the Panthers. Since losing to the Raiders six weeks ago, Kansas City has beaten a solid Bills team and enjoy two blowout victories over the woeful Jets and Broncos before the comeback dub over the Panthers. At 8-1, they’re average scoring margin is 11.4 points per game. K.C. was favored by 12 when they lost to the Raiders at home.

The Chiefs have been so good for so long, we sometimes take their video game stats for granted, but in a matchup against a division rival, these types of numbers still do matter when debating whether or not to lay the points. Kansas City is:

On the injury front, Kansas City expects receiver Sammy Watkins, o-lineman Mitchell Schwartz and cornerback L’Jarius Sneed back. The Chiefs did lose defensive end Taco Charlton to a fractured leg in the win over the Panthers.

Looking back at that first meeting, it’s pretty evident how the Raiders pulled off the upset. Las Vegas dominated time of possession 35-25, converted 9-of-16 third-and-fourth downs, protected Derek Carr (1 sack) and scored on all three trips to the red zone. That type of efficiency – especially TOP – is opposite of what we’ve come to expect from Chiefs’ opponents.

Before their blowout win over the Broncos, Las Vegas’ margin of victory in its previous five games was just 7.4 points. In their three losses, to the Patriots, Buccaneers, and Bills, their margin of defeat is 16 points. This Dr. Jekyll / Mr. Hyde persona is one that has haunted talented Raiders teams in the past and why this Sunday’s point spread is +7 and not +4-or-lower. Bookies know that Las Vegas’ success is a house of cards ready to come tumbling down at a moment’s notice.

On that contrarian note, some positives heading into the game:

Andy Reid after a BYE carries a lot of weight. Don’t poo-poo it. While the Raiders three-game win streak is nice – especially road wins at the Browns and Chargers – the quality of those wins does come with an asterisk or two when compared to the gauntlet they are about to face against a well-rested Chiefs offense hungry to right the earlier season wrong.

Check out our expert NFL betting guide if you want to learn more about How to Bet on Week 11 of the NFL or head right to our favorite online sportsbook review page and find the right site for you!