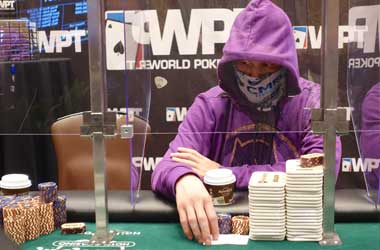 The World Poker Tour (WPT) marked its return to the live felts after being off the road for almost a year via the Lucky Hearts Poker (LHP) tournament.

The $3,500 buy-in event attracted a total of 1,573 entries to generate over $5 million in total prize pool, well over its initial guarantee of $1 million.

When the dust settled, it was Ilyas Muradi who emerged victorious, successfully converting his satellite ticket into a massive payday following a three-way deal.

Muradi is relatively unknown in the poker world, with his Hendon Mob record only showing two tournament results, including his latest victory at the Lucky Hearts Poker Open.

Muradi, former reality TV show star and WSOP bracelet winner Ronnie Bardah and Maryland resident Robel Andemichael were the last three players remaining and all agreed to a deal, with each one guaranteed to take home at least $545,000. In the end, it was Muradi who came out on top, taking home $620,000 in top prize, including a WPT Tournament of Champions ticket worth $15,000.

The other players who made the final table were Francis Margaglione who finished in fourth place for $293,510, Jesse Lonis who took fifth place for $223,895, Philip Shing exited in sixth place for and Andy Hwang took seventh place for $115,630.

The top 197 finishers all walked away with a share of the massive $5 million prize pool. Among them were Aaron Mermelstein, Kevin Eyster, Sam Panzica, Justin Liberto, and 2020 WSOP Main Event runner-up Joseph Hebert.

Darren Elias, the record holder for most WPT titles with four, created some buzz as the tournament came close to reaching the final table. The American poker pro was on the hunt for his fifth WPT win, but he failed in his bid after losing a monster flip to Hwang, another WPT champion.

Elias failed to advance further, busting in 10th place for $79,455, his 43rd WPT cash to date, another impressive WPT record for the 34-year-old Boston, Massachusetts native.

The WPT will hold its next live event in the US on March 4 at the Venetian on the Last Vegas Strip. The tour has yet to confirm any more live events for 2021. We will wait for further announcements.