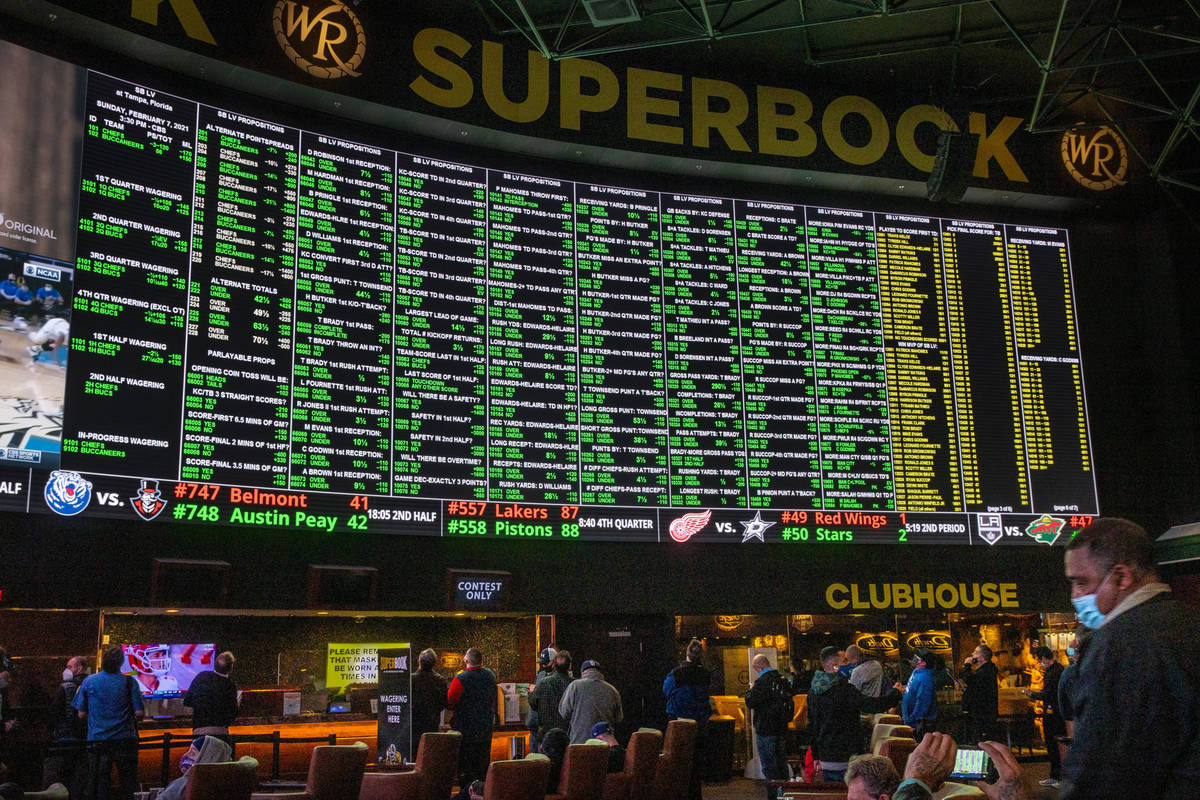 The 2007 New England Patriots went 16-0 in the regular season but lost the Super Bowl.

In similar fashion, Nevada sportsbooks set an all-time record for football betting handle, or amount wagered, in 2020. But several Las Vegas oddsmakers don’t expect the books to break the state record for Super Bowl handle on the Feb. 7 game between the Chiefs and Buccaneers.

“I’d bet no,” William Hill sportsbook director Nick Bogdanovich said. “But if it happened, it wouldn’t surprise me.”

Nevada set records for Super Bowl handle in three straight years from 2016 to 2018, topping out at $158.6 million in wagers on Philadelphia’s 41-33 upset of New England.

The handle was $154.7 million last year, when Kansas City beat San Francisco 31-20. Six weeks after that game, the sports world stopped because of the coronavirus pandemic, which is expected to reduce the amount of visitors to Las Vegas for Super Bowl LV and will restrict the number of people at casino parties.

“I don’t think we’ll be near the record because our parties are restricted to 50 people at a time in the room, and I don’t think as many people are going to come from out of town,” South Point sportsbook director Chris Andrews said. “Part of it’s COVID, and part of it’s (legal sports betting) being in other jurisdictions.

“But I’ve got to tell you that (South Point owner) Michael (Gaughan) and (oddsmaker) Jimmy (Vaccaro) both think I’m wrong. They think it’ll be a record or real close.”

Almost three years after the U.S. Supreme Court struck down the federal ban on sports betting, it’s now legal and offered in 20 states and Washington, D.C.

“But Nevada is the king of Super Bowl parties,” Bogdanovich said. “Even though they’ll be limited, we’ll still get some people here.”

Bogdanovich said early wagering at William Hill seemed slow to him. But betting has been fast and furious at BetMGM, which on Thursday took a $2.3 million wager on underdog Tampa Bay (+3½) after taking four six-figure bets on Kansas City totaling $505,000.

“We always take six-figure bets, but this year it’s just been crazy,” he said. “I don’t know if that can overcome the decrease of people in town because everybody that comes to town bets the Super Bowl.

Football betting in Nevada was pandemic-proof in the regular season, as the books took $1.9 billion in wagers and won a record $127.7 million on the sport. The handle was boosted by the increased use of mobile apps, which accounted for 57.1 percent ($2.5 billion) of the state’s 2020 handle ($4.3 billion).

But because the Super Bowl has become such a major tourist event in Las Vegas, Westgate sportsbook vice president Jay Kornegay and director John Murray don’t expect the state to set a record on the game.

“We rely a lot on tourists on our property, but we just won’t be able to offer that this year, though we do have six different venues set up for 50 people because that’s our max,” Kornegay said. “But I would expect some of the other jurisdictions that offer remote sign-ups and full mobile wagering are probably going to put up some pretty good numbers.”

One factor that can only help the handle is the matchup headlined by quarterbacks Tom Brady of the Buccaneers and Patrick Mahomes of the Chiefs.

“The handle will still be through the roof. It’s too good a matchup,” Bogdanovich said. “It doesn’t get much better than Brady vs. Mahomes.”