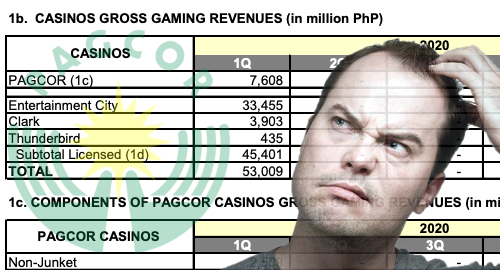 Philippine-licensed online gambling revenue was the only vertical in growth mode during the first quarter of 2020, according to new (and somewhat suspect) stats from the country’s gambling regulator.

Figures released this week by the Philippine Amusement and Gaming Corporation (PAGCOR) show overall gaming revenue hit P60b (US$1.2b) in the three months ending March 31, virtually unchanged from the same period last year. That would be an impressive feat, given the impact of COVID-19 on the local gaming industry, but it seems somebody at PAGCOR forgot to check their sums.

The PAGCOR stats show brick-and-mortar casino revenue of P53b, up around half-a-billion from Q1 2019. But the 2020 figure has been goosed by an apparently accidental double-counting of the P7.6b generated by the PAGCOR-operated Casino Filipino business.

The PAGCOR-licensed privately-run casinos in Manila’s Entertainment City gaming zone reported revenue of nearly P33.5b in Q1 2020, down from P39.8b last year, reflecting the mid-March closure of land-based gambling operations due to COVID-19.

The casinos in the Clark freeport saw their revenue rise nearly P1.1b to P3.9b, while the two Thunderbird casinos were flat at P435m. That brings the private casino revenue total to P37.8b, not the P45.4b listed on PAGCOR’s Q1 subtotal. To arrive at that latter figure, you have to count the Casino Filipino stats twice, which might be tempting but isn’t really legit.

The land-based electronic gaming site venues that cater to a mostly local clientele reported revenue falling 7.2% to just under P7b.

PAGCOR’s share of revenue derived from its Philippine Offshore Gaming Operators (POGO) licensees improved from P1.34b in Q1 2019 to P1.8b in the most recent quarter. That number will likely take a significant step back when PAGCOR delivers its report on the current quarter thanks to the limited number of POGOs cleared to resume operations following their COVID-19 closure.

Overall, PAGCOR’s gross income in Q1 totaled P17.2b, down more than P1b year-on-year. The figures are expected to nosedive in Q2 as land-based gaming operations have yet to reopen due to the country’s struggles to flatten its COVID-19 curve.

Meanwhile, PAGCOR issued a memo last week detailing new rules regarding its licensed sports betting service providers’ ability to offer online wagers on cockfighting. Specifically, if “remote betting on live cockfighting is offered online or through the internet, the same shall be available only to VIP Players with Facial Verification Access, Minimum Betting Limits, and Know-Your-Customer Features” as detailed in the existing regulations.