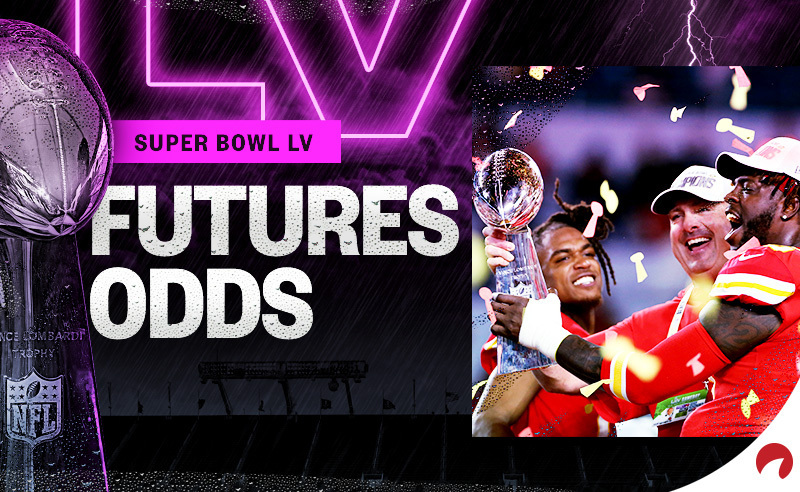 After 256 regular-season games and 12 playoff matchups, the stage is set for Super Bowl 55 in Tampa, Florida, on February 7.

For the first time ever, the host city will have its team in the Super Bowl, as the Buccaneers will welcome Patrick Mahomes and the Kansas City Chiefs to Raymond James Stadium with the right to be crowned champions on the line. With two teams left standing, let’s take a look at who is favored to win the Super Bowl.

When it comes to moneyline Super Bowl odds, online sportsbook Bovada has tabbed the defending champion Chiefs as -165 favorites to go back to back. Tampa Bay, which is seeing postseason football for the first time since 2007, is coming back as a +145 underdog.

On the spread, the Chiefs are 3.5-point favorites. The total has held steady at 56.5 since opening on Sunday evening.

For more information on everything you need to know about wagering on the big game, head over to our Where to Bet on the Super Bowl page. Our Super Bowl hub has comprehensive coverage of everything you’ll need to wager on the championship contest.

Odds as of January 29 at Bovada

Barring any significant line movement, Tom Brady will be an underdog in the Super Bowl odds for just the second time in his 10 appearances in the big game. In his Super Bowl debut in February 2002, Brady and the Patriots were 14-point underdogs against the St. Louis Rams. The Pats won that game outright 20-17.

Brady led the Bucs to the franchise’s second Super Bowl appearance by helping to dispatch the Green Bay Packers 31-26 in the NFC championship game. At 43, Brady will be the the older player ever to play in a Super Bowl.

Tampa Bay’s offense is peaking at the right time. The Bucs have scored at least 30 points in each of their past six games, averaging 35.7 over that span. The Chiefs are averaging 25 in that same span.

The biggest cause for concern in Tampa Bay’s odds to win the Super Bowl is Brady’s ball security. The six-time Super Bowl champion threw three interceptions against the Packers, but Green Bay failed to turn any of those INTs into points. Brady threw 12 picks in the regular season – the most for him in a campaign since 2011.

Mahomes Has Chiefs Primed for Another Title

The biggest question mark for the Chiefs ahead of the AFC championship game was the health of Patrick Mahomes. Mahomes, who was knocked out of K.C.’s divisional-round clash against the Browns, entered concussion protocol last week but was cleared to play against the Buffalo Bills with a Super Bowl trip on the line.

Mahomes picked up right where he left off, as the Chiefs rolled to an easy 38-24 victory over the Bills. Kansas City snapped Buffalo’s eight-game winning streak in the process.

No matter how poorly the Chiefs start, they never seem to be out of games thanks to Mahomes’ ability to score points in bunches. Holding off the Bucs’ stellar defensive front is going to be imperative to prevent falling into an early hole.

Kansas City’s secondary is going to need to keep up with the likes of Mike Evans, Chris Godwin, Rob Gronkowski, Scott Miller and perhaps Antonio Brown, which is not an easy task.

As favorites in the Super Bowl betting odds all season long, the Chiefs are used to coming out on top in shootouts, but the Bucs are a team that can bring the kind of offense that could go toe to toe with them in a high-scoring affair.

When it comes to betting on the NFL, odds are available before teams take their first regular-season snaps. You can even bet on a potential Super Bowl winner in August. Certain squads will always be contenders, especially if they won the previous year. When bookmakers set the lines, they look at offseason roster moves, coaching changes and past on-field performance. To bet on the odds for the Super Bowl, you’d make a futures bet.

What is a NFL Futures Bet?

This is a bet in which you would look at the odds for the Super Bowl, weeks or sometimes months in advance of the big game, and decide which team you think will win. Let’s say you want to make a futures bet today. At your sportsbook of choice, the odds might look something like this:

If this were a moneyline bet, you’d be able to see which team is the clear favorite because it would have a minus sign beside its odds (-). For Super Bowl futures, the team with the lowest odds is favored to win the NFL championship, and the rest are underdogs.

Let’s say you feel strongly about the Saints and believe they’re going to win it all. If you were to bet $100 on them and they did triumph, you’d get a payout of $650 – your original $100 is returned along with your winnings of $550. Our Odds Calculator will show you how much you’d win based on the odds and amount bet.

The odds change throughout the season as key players get injured, trades happen and coaches get fired. Line movements for NFL futures happen weekly, so if you see odds you like, it’s best to bet on them ASAP. The Packers may be +900 to win the Super Bowl in October but after a surge in November their odds could jump to +400 and you’ll make less money than you would if you’d bet them at +900.