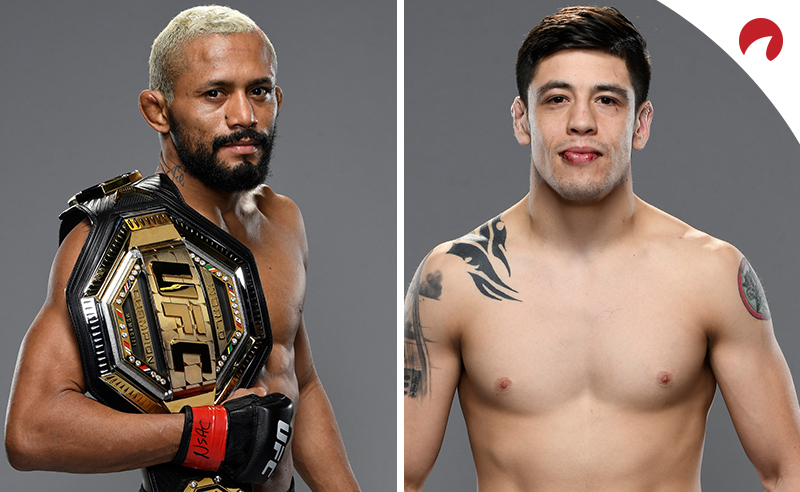 The final PPV of what has been a wild and uncertain 2020 is closely approaching with the flyweight title up for grabs for the second time in less than a month. Deiveson Figueiredo returns to the cage after defending his strap and will look to retain the title against Brandon Moreno at UFC 256.

This weekend’s event takes place on Saturday, December 12, at the UFC Apex Performance Center. Looking at the UFC 256 betting odds, Figueiredo is a sizable favorite in the main event and Moreno is the underdog. We have a full event betting preview, UFC predictions and the UFC 256 odds right here.

A win for Figueiredo would close out an incredible 2020 for the champion. That would give him four wins in four title fights, though he missed weight in the first, and he has already earned three finishes – perhaps fighter of the year?

Meanwhile, Moreno has put back-to-back losses in his rear-view mirror. He has a ton of momentum heading into this title bout, going 4-0-1 in his last five fights, including a victory over Jussier Formiga, the lone man to beat Figueiredo.

Currently, the biggest favorite in the UFC 256 odds is in the heavyweight division fight between Ciryl Gane (-450) and Junior dos Santos (+325). The closest line comes in the Gavin Tucker-Billy Quarantillo bout with Quarantillo coming in at -135 and Tucker the underdog at +105.

New to betting on the fights? Check out our UFC betting guide to get you in the action. Also, keep an eye on our UFC odds page for the latest up-to-date UFC 256 betting odds.

Without further ado, here are my UFC best bets for UFC 256: Figueiredo vs Moreno:

Figueiredo (-335) is quickly becoming a star in the UFC. “Deus Da Guerra” or “God of War” has won five fights in a row and his last four ended in under 1.5 rounds. Meanwhile, Brandon “The Assassin Baby” Moreno (+255) is coming off his first finish since June 2019, ending a streak of three straight bouts that went the distance.

For more on this fight, check out my Figueiredo vs Moreno odds analysis.

Returning to the cage for the first time since his loss at UFC 249 is Tony “El Cucuy” Ferguson (-185), whose 12-fight winning streak was snapped with that loss. Riding a lengthy win streak of his own is Charles “Do Bronx” Oliveira (+150), who has won seven in a row and would be catapulted into the title conversation with a win over Ferguson.

We have a good one here. Rafael “Ataman” Fiziev (-160) looks to extend his two-fight winning streak and is fresh off a Fight of the Night performance vs Marc Diakiese in July. Meanwhile, Renato Moicano (+130) looks to make it two in a row in the lightweight division after moving up from featherweight earlier this year.

I talked off the top of Deiveson Figueiredo potentially being fighter of the year, but Kevin “Trail Blazer” Holland (-145) may also have a claim to that title, riding a four-fight winning streak since May and looking to go 5-0 in 2020. Meanwhile, Jacare Souza (+115) makes his first walk to the cage in 2020 and is in search of his first victory since November 2018.

Former UFC heavyweight champion Junior “Cigano” dos Santos (+325) finds himself on a three-fight losing streak, the longest of his career, and is in search of his first win since March 2019. Meanwhile, the undefeated Frenchman, Ciryl “Bon Gamin” Gane (-450), looks for his fourth win in the UFC and seventh overall.