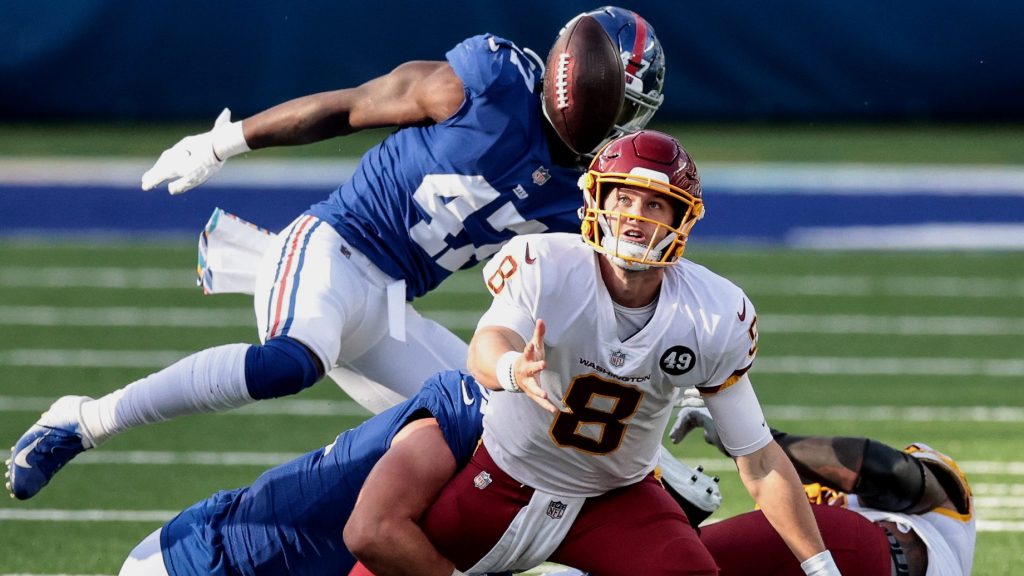 The Washington Football Team (2-5) are surprisingly in second place in the NFC East, considered the NFL’s weakest division as all four teams are under .500. The Philadelphia Eagles are first at 3-4-1, the Dallas Cowboys (2-6) are third and the New York Giants (1-7) are last.

Below, we analyze the midseason Washington Football Team 2020 Super Bowl odds, odds of winning their division as well as NFL futures and opine on whether they’re worth a Super Bowl futures bet at this time.

Washington beat Philly 27-17 at home in the season opener. Then it dropped five in a row before easily taking care of the struggling Cowboys 25-3 last Sunday.

QB Kyle Allen stepped in, starting the last three games, and has completed 68.8% of his passes for 548 yards and 4 touchdowns with 1 pick.

Rookie RB Antonio Gibson leads the team in rushing with 371 yards and 4 TDs on 84 carries, while WR Terry McLaurin (577 yards, 2 TDs) is the top receiver.

Shocker! The offense ranks near the bottom of the league in most categories, most notably 30th in points (19.0) and 29th in passing yards (192.6) per game.

Washington backers are a little bit ahead as it’s 4-3 against the spread – with a 3-4 Over/Under record.

With no one running away from the field, the division is definitely a wide-open race.

Washington hosts the Giants in Week 9, visits the Cowboys for a Thanksgiving game in Week 12 and closes at the Eagles in Week 17.

NO, there’s no chance Washington wins the Super Bowl, let alone the NFC. Not with its offense.

NO, even though all four NFC East teams are below .500, there are too many road bumps in Washington’s remaining schedule. It still has to play at the Pittsburgh Steelers (7-0), at the San Francisco 49ers (4-4) and vs. the Seattle Seahawks (6-1) at home – all expected losses.

Gannett may earn revenue from audience referrals to betting services. Newsrooms are independent of this relationship and there is no influence on news coverage.